Behind the Kawagoe Festival 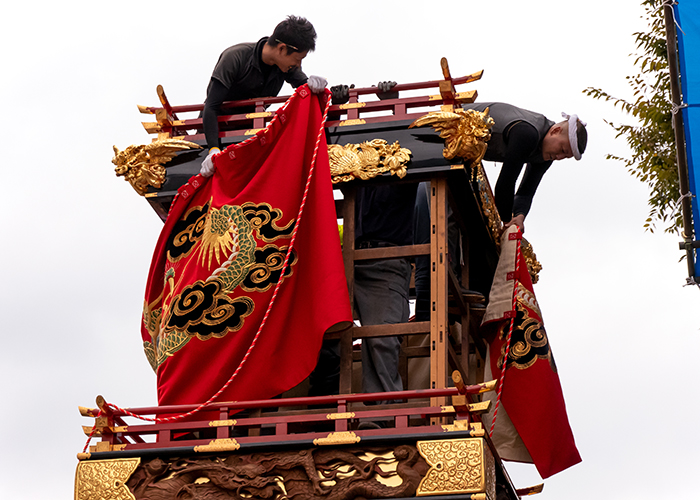 Behind the
Kawagoe Festival
Watching the Construction of a Dashi Float.
Watching the Construction of a Dashi Float.
We take a trip to Kawagoe on October 18, the day before the start festival to see how a dashi float is assemblednd witness the festival preparations.
On an early, cloudy Friday morning we make our way through the streets of Kawagoe.
At this hour the tourists are not yet roaming the shop-lined streets and the town is quiet.
Long decorative banners called kōhaku-maku (lit. red and white curtains) are already hanging on the side of the streets and under the shop roofs, building up the excitement for the upcoming festival. 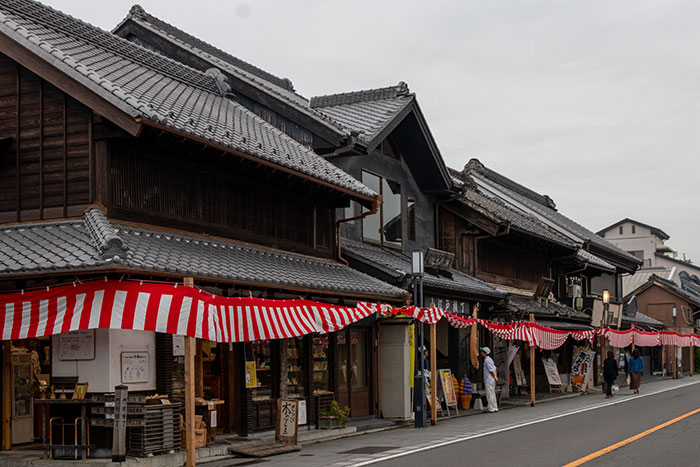 We are going to witness the complete construction of the Okina (翁) float, owned by the Saiwaicho district.
Waiting for us is Mr. Kumakura, representative of the Saiwaicho Dashi Maintenance Neighborhood Convention and vice president of the Kawagoe Hikawa Festival Dashi Preservation Association.
A group of about 16 tobi (specialized construction workers) is preparing to put this dashi together. 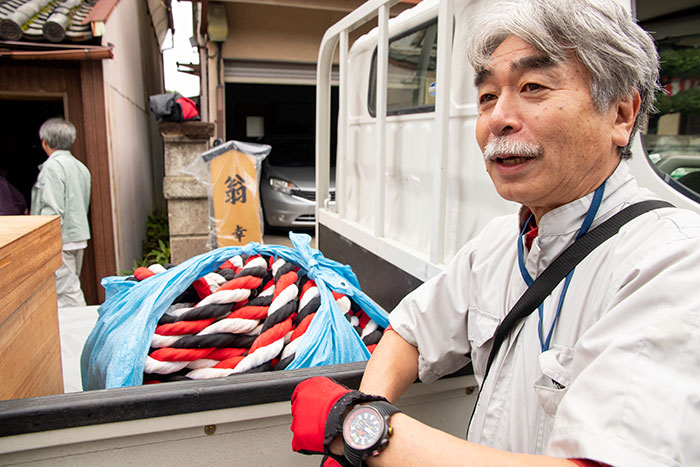 It’s a little before 9 a.m. when the cheerful crew gets to work. These are the same people who will operate the dashi float during the festival.
We leave Kawagoe’s main road and enter a semi-deserted side street to find the warehouse where the disassembled float is stored.
Everyone starts taking out a considerable number of wooden boxes of all sizes, wooden poles, ropes and other parts.
“In the past the dashi parts were divided among the district’s residents who would store them in their homes,” explains Mr. Kumakura. 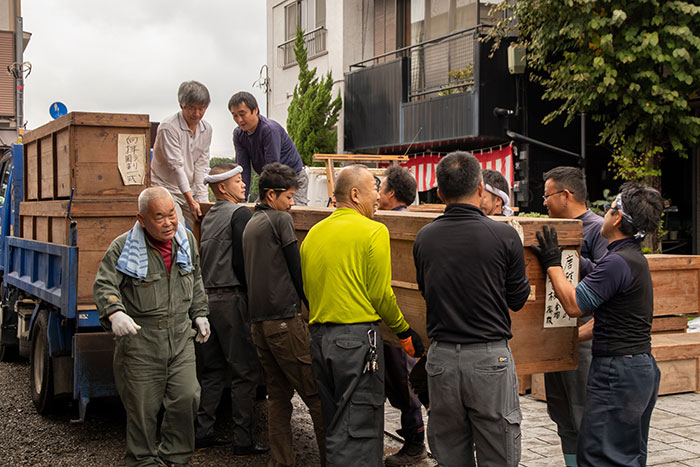 There are a total of 29 dashi floats in the Kawagoe festival.
27 districts of Kawagoe each own one. Saiwaicho, which was originally three separate districts, is the only one that owns two floats.
One of the 29 floats is owned by Kawagoe City.

Traditionally all dashi floats were assembled for the festival and disassembled afterwards, but nowadays only four or five undergo this procedure every year.
The majority are stored in tall and narrow warehouses that are specifically built for this purpose. 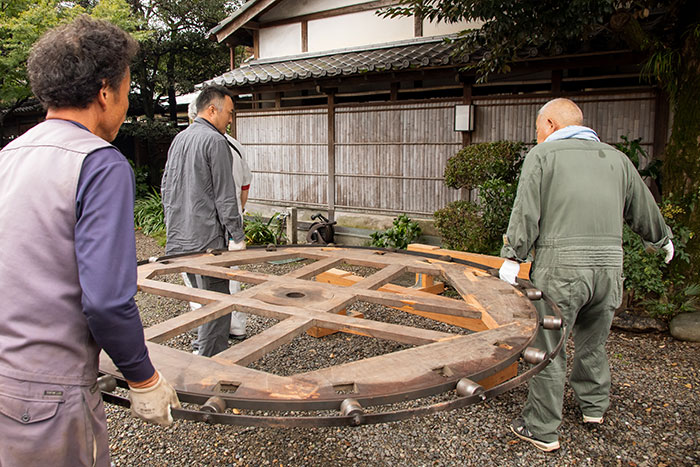 The workers take out the main piece of the rotating stage, which is unique to the Kawagoe Festival floats.
It was introduced at the end of the Meiji Period (1868-1912) in order to allow the floats to turn and face each other when they cross paths.
It’s exciting to be able to see these inner workings that will not be visible when the float is assembled. 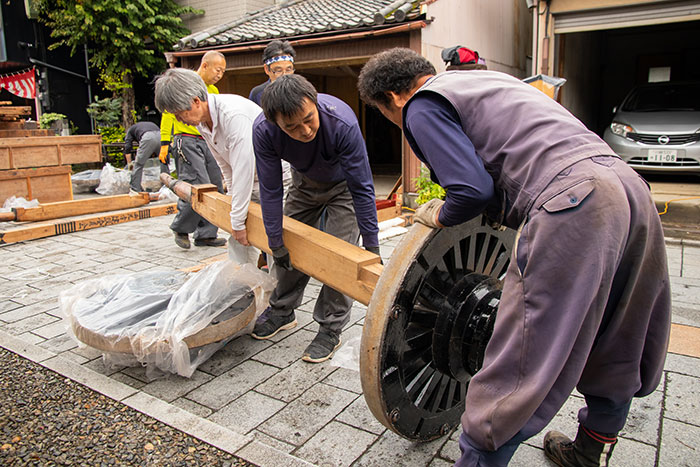 The heavy wheels are mounted to their shafts and the basic frame is built.
With all the necessary materials loaded onto various trucks, the workers make their way back to the building site, where a big tent and roof have been set up in case it rains.

Piece by piece, the lower structure of the dashi starts coming together.
In true Japanese style, the dashi are assembled without using a single nail.
All pieces are secured using wooden pegs, ropes, or are simply made to fit together. 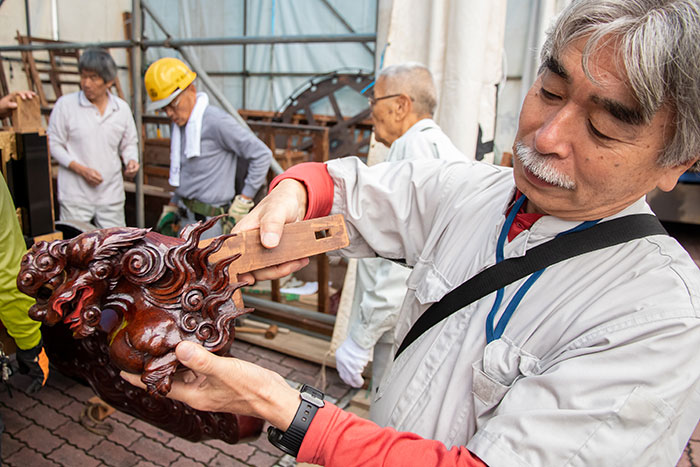 Mr. Kumakura shows us how each piece is marked or numbered and has to be mounted in a specific order.
This one has carved edges that will make it slide into place on the side of the cart’s stage. 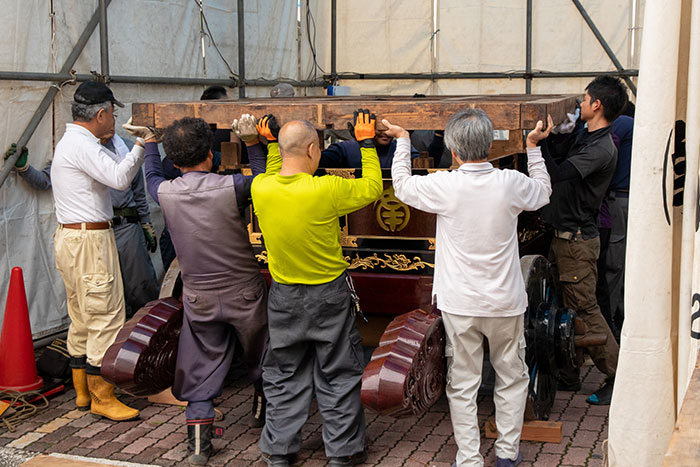 Once the base of the cart is completed it’s time to put together the rotating platform.
The two massive wood pieces and the metal rail that make up the platform are hauled onto the base. A lot of coordination is needed to fit all the poles in the respective holes.

After mounting some decorative pieces, the workers move on to the intricate upper structure.
This is the collapsible part of the float where the doll will be placed, that can be lowered or raised depending on the need.
While most people work on the upper part, a few of them carefully secure the float to the wheel rods using ropes. 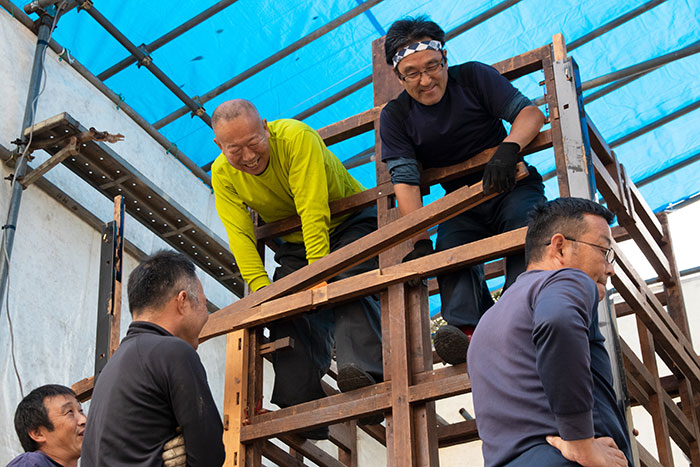 Mounting the inner structure requires a long time. There are a lot of pieces to work with and the float is starting to gain some height.
The expert builders balance on it without any protective gear or harness.
They secure piece after piece, always with a smile on their face. 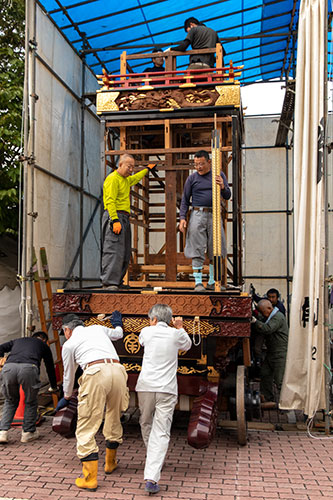 It’s past noon when the doll stage is finally assembled.
Now it’s time to finish off the top with some decorative elements and start working on the front of the float.
This is the hayashi (囃子) stage which will host five musicians and a dancer. 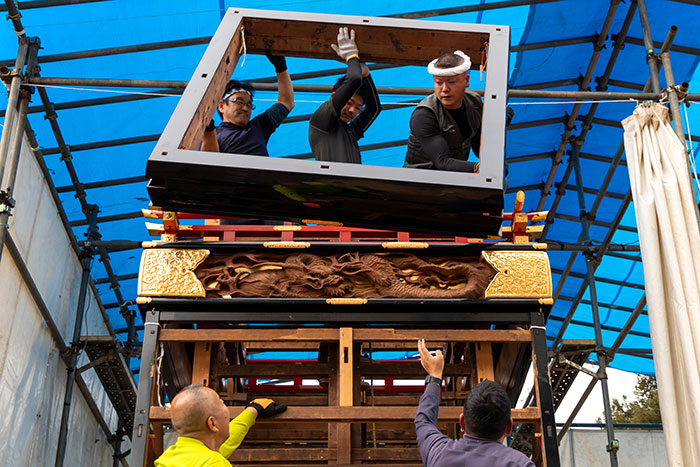 Beautifully carved and painted wood is added to the float piece after piece.
It seems like they will never end. Slowly, the hayashi stage starts taking shape.
Curious onlookers start gathering around the float.

The heavy-looking, curved roof is finally hoisted on top of the hayashi stage.
After that it’s just a matter of adding some finishing touches: The black and gold ornamental railing, some beautiful golden carvings and Japanese flags. At 3 p.m. the float is almost ready for the doll which is carried to the site by five people. 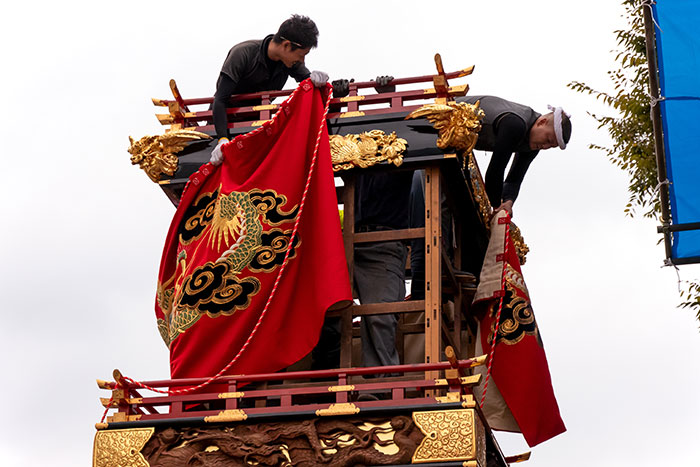 Before the doll is put in place the workers have to hang the maku (幕), beautiful curtains that cover the upper and lower compartments of the dashi.
The top maku is bright red with a magnificent embroidery of the Cloud Dragon Unryū, while the lower maku is a more somber green with a golden pine motif.

The doll is portrayed in the act of performing a Noh play called “Okina”, hence the name of the float.
Seeing it up close is a rare privilege, and it also makes us realize how big it is. 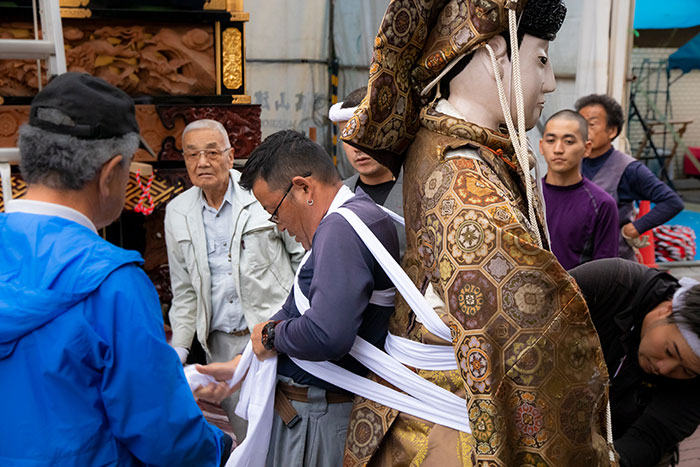 Excitement fills the air as the crew prepares to install the doll on top of the dashi.
This delicate procedure is carried out by the son of the tobigashira (chief construction worker).
The doll is secured to his back using a white strip of cloth.
He then climbs a ladder to the top of the dashi where two people are waiting to lift the doll inside the compartment.

With the doll safely in place, its compartment is lowered and the dashi is moved back under the tent where more finishing touches are applied.
The decorative lanterns are prepared, the taiko drum is mounted, and little by little the dashi assumes its final appearance.
It’s nearly 5 p.m. when the workers finally secure the rope that will be used to pull the dashi onto the front.

While the float is being assembled, more people from the neighborhood set up the Kaisho (会所).
Every district has its own Kaisho which is a spiritual place and a sort of headquarters.
Inside, an altar is erected with food and sake offerings for the gods. Later tonight, a Shinto priest will visit the Kaisho and the dashi will undergo a purification ceremony to prepare it to host the gods that will descend into it for the duration of the festival. 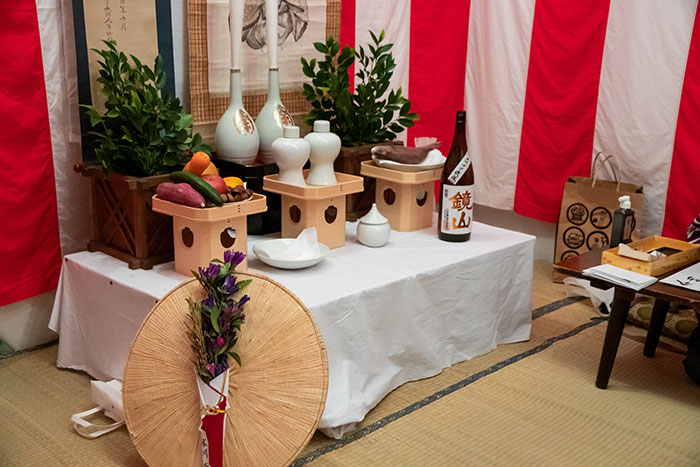 One of the people setting up the Kaisho tells us that the preparations are a vital part of the event.
Celebrating the festival after a long and hard work makes it so much more gratifying and fun.
The festival also brings everyone closer, as people who normally don’t spend time together have a chance to talk and get to know each other.
This is part of the spirit of Kawagoe Festival.
This Year's Festival This Year's Festival 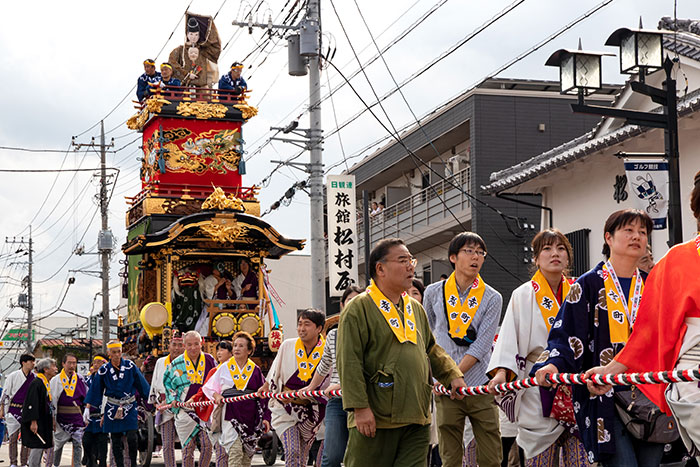 The completed Okina dashi participating in the 2019 festival parade

-Saturday 19 October, 2019
The day started with the Jinkosai, the most ancient ritual of the festival.
During the Jinkosai the gods are said to descend into the mikoshi (portable shrines), which are paraded around the city.
Two events took place at night: the Yoiyama (festival eve) and the Ladder Acrobatic Performance by the Tobi.
The first day culminated with the Hikkawase, where floats freely paraded around town and engaged in exciting music battles every time they crossed each other’s path.

-Sunday 20 October, 2019
This year’s festival celebrated the first year of the Reiwa Era.
During the day, the dashi floats were paraded through the main roads of the central part of Kawagoe.
At night, the Hikkawase took place a second time. This was the crowning moment of the festival, and the liveliest.
From the reporter From the reporter
I am Italian and I have been living in Japan for almost 8 years.
I have seen many Japanese festivals but this was my first time at the Kawagoe Festival.
I felt privileged to get the chance to see the lengthy process of assembling a dashi float from start to end.
It has helped me to better understand and enjoy the spirit of the festival.
What impressed me the most was the energy and cheerfulness of the assembling crew.
They worked hard for many hours but they were having fun all the way, and that was heartwarming to see.